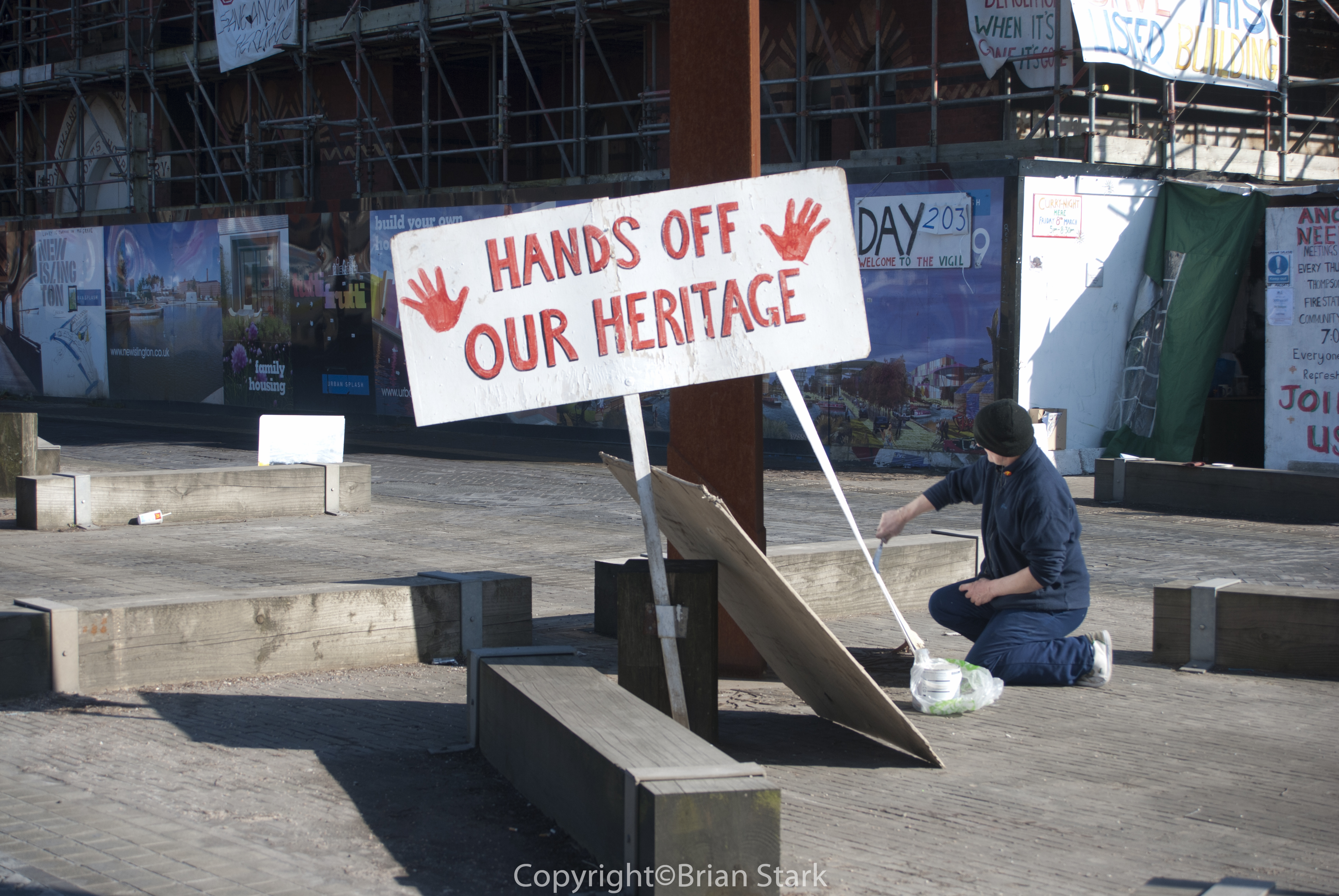 With the threat of demolition continuing into early-2012, several meetings were held to discuss a plan of action that would alert more people to the plight of the Dispensary. Letters were written to the Planning Department, articles published in a local magazine informing people of the proposed demolition and more letters were sent to the Government Minister for Culture, as well as the Minister for Communities. Radio North Manchester FM also invited members of the group to speak out about their concerns regarding the Dispensary so that their message could reach more people in the surrounding areas.

A video on this subject can be seen here.

Within the space of a few days in early July 2012, this crude, primitive, yet highly effective structure of the Vigil would be built every morning by the more practical members of the group. The structure comprised of odd-shaped pieces of wood hammered together, as well as plastic sheeting for shelter during wet weather. This structure was taken down each evening and the same process would be repeated the next day. This sent out a clear message not only to the local community, but also to those in power: there would be strong resistance to the proposed demolition.

The Vigil became a powerful symbol of community action. Despite demolition being ‘waived’ in May 2013, the vigil became a semi permanent fixture. a structure where several milestones throughout the years were celebrated. Everyone was invited to these celebrations. The Vigil remained a strong presence until late 2017. It is hard to imagine this taking place anywhere other than Manchester, but as the saying goes “We do things differently here”. With the offer of cup of tea and a biscuit or two, the vigil became the space on the edge of contested territory, where anyone, whoever they were or wherever they were from, could visit. People flocked to find out what was happening, take photographs, discuss the Dispensary and generally show their support.

Artist Stephen Campbell came to the Dispensary to paint the building. He just turned up on his bicycle and set up his easel. Very similar to the casual attitude of Lowry when he visited the Dispensary in 1952. 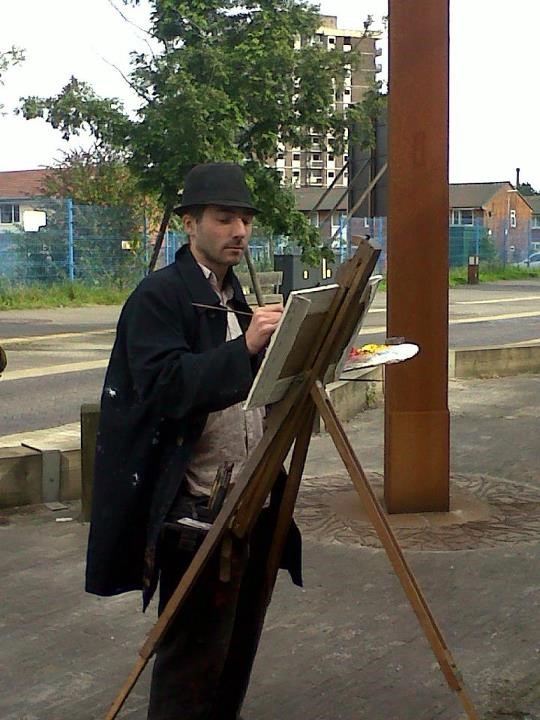 This was the painting produced by Stephen on that day.

Painting of the Dispensary by artist Stephen Maxwell Campbell

Visitors from all around the world came to the Vigil, such as this group of academics visiting Manchester for the conference relating to Medicine, Science and Industry. Students from both universities in the city were inspired to focus their work on this unique campaign. This group of people you see above came from Canada, Australia, South Africa, America and Germany.

A petition to gather support for the restoration of the Dispensary began at The Vigil and over 5,000 signatures were gathered, not just from outside the Dispensary but from those organisations throughout the neighbourhood who supported our efforts. The petition was handed in to Manchester City Council’s Planning Department at First Street, Manchester.

The campaign group felt that it should commission its own Surveyor to survey the Dispensary and report back on whether the building was beyond repair or whether it could be salvaged and brought back into use. Without any funds, there was only one option and that was to ask the community to donate towards commissioning a Surveyor. The campaign group was not disappointed as it discovered the goodwill to support the saving of the Dispensary was tremendous. The group managed to raise £600 to pay for the survey.

The verdict was that the building had been partly demolished and there was no sign of retention of materials for future refurbishment. In other words, the building was not beyond repair and had the potential to be restored for future use.

This was all we needed to know and under the Freedom of Information Act the group applied to see all the documents relating to the Ancoats Dispensary. It wanted to understand how this situation had been arrived at and who had been involved in the decision-making.