Ancoats Hospital in Danger of Demolition

The difference with the campaign that began in 2011 was that there were no services left to save, only the Dispensary itself. In 2001, the Dispensary and hospital buildings were acquired by a developer from the NHS Trust. By this time, the hospital complex was in poor condition and considered to be of low architectural merit and so was therefore demolished. The developer sought to retain and refurbish the building as part of a wider redevelopment proposal. A masterplan for the New Islington project was drawn up and, as various schemes came and went, the Dispensary awaited her fate, floundering on the edge of what was to become the North East Manchester Regeneration Programme.

In October 2003, a detailed application was submitted. Proposals included new buildings, such as Chips, Shingles and Urban Barn, together with the refurbishment of the Dispensary. The intention was that this work would be phased and approval was given by Manchester City Council in March 2004.

In February 2005, a re-designed scheme for the Dispensary was proposed, introducing some commercial section at ground floor level. This was again approved by the Council. Changes to market conditions meant that it proved difficult to justify the commercial viability of the new building, Shingles, which was intended to follow Chips. Ultimately, the Dispensary conversion also did not progress.

In April 2009, close to the completion of Chips, MCC raised concerns over the deterioration of the brick gables on Upper Kirby Street. As a result, three pikes were removed and dismantled. In May, an unsuitable scaffold structure, which was to be used as a temporary retention, was erected by the developer to supposedly secure the elevation.

An approach was made to the then North West Development Agency to safeguard the building and they granted pre-approval funding of £100,000 in January 2010. The funding was to be subject to obligations on the part of Urban Splash to complete the conversion of the building for office use when market conditions made this viable and bank funding was available that met the NWDA funding criteria.

A new planning application and listed building application was not made at the time due to the need to progress work quickly and MCC planners suggested that repairs within the existing consents could commence and materials salvaged for use in reconstruction. This funding from the NWDA was to allow the developer to bring the building into a safe, weather-tight shell condition which could be effectively mothballed for future refurbishment. This work included repairs to the roof, internal and external masonry walls, floors and windows. Orginially, the full amount of funding was to be spent by the end of March 2010, however an extension was granted until July 2010.

When the Coalition government came into power this meant that a freeze on spending occurred and the NWDA was dissolved. Funding for regeneration projects was immediately put at risk. The funding agreement between the developer and the NWDA was not executed prior to the work starting and so the grant approval for £1million was withdrawn. So, although having received a total of £100,000 in funding from NWDA for pre-approval expenditure, when funding was withdrawn the safeguarding works were halted. The Developer made representations to the NWDA to have the funding reinstated, given the circumstances and intent of the parties involved, but the decision could not be reversed. It would seem that the Developer did not have the financial resources to continue with bringing the building into a safe, weather-tight shell condition. Attempts were made to seek funding assistance from various heritage groups and alternatives solutions were sought, but to no avail and the Dispensary went up for sale. 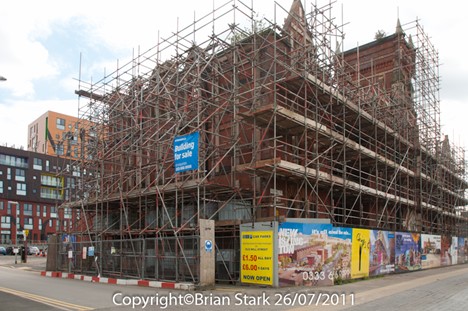 This was a Grade II listed building of significant historical importance to Manchester and particularly Ancoats. With no buyers, the application to demolish this building began its journey through the Planning Department.